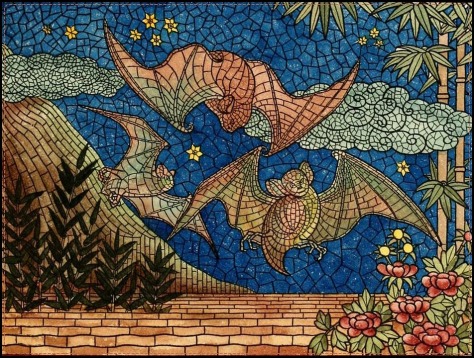 I have a three-season writing room. Four-season, if I light the wood stove and heat the place up. Finishing the roughed-in room over my husband’s workshop was one of the first projects I undertook when moving to the wilderness of Oregon.

Wilderness naturally entails a plentitude of wildlife, and my writing room has endured its share of feathered, winged, and furry visitors.

I love it when the hummingbirds fly in the window and hover over my head before zipping out again.

I didn’t even mind when the walls filled with wasps. The room vibrated with a soft hum while I sat peacefully among them and wrote. After two years of friendly buzzing around my head, they mysteriously moved out all on their own.

Then the bats moved in.

We are a bat-friendly household even though Nature Boy (aka the husband) has watched a few too many Dracula movies. He swears that “Batty” swoops at him as he runs the gauntlet from the door to the car every morning.

For two years, the bats and their buddies have been partying in my writing room, and it didn’t look like they intended to take a hint from the wasps and relocate any time soon. In fact, they were inviting their friends to take up residence. It was getting a little crowded, and though bat poop isn’t horrifyingly gross, it’s still gross.

So, a week ago, it was time for Batty and his buds to git.

The first task was to plug up their access to the room, which meant closing the gaps around the windows and doors, hauling the nail gun and compressor up there and securing the wooden slats on the ceiling. I knew where they were getting in because I could see the grubby mess left by their little hands and feet. Eeek.

I found two tiny fellows, no bigger than my thumb, hanging behind my picture frames.  I opened the door and windows, and fitted with gloves, nudged the little guys from their roosts. That probably wasn’t the best idea, because I found myself in a small room ducking and weaving as two bats flitted, swooped, and dove around my head.

The dummies had no idea where the windows and door were, and all three of us were in a bit of a panic. I considered running out of the room screaming, but I feared they’d simply find a new place to hide. And honestly, I’ve never been particularly scared of wild animals, so I stayed and encouraged them with a kind voice to scram!

Finally, Batty and his cousin flitted out the window and I slammed the thing shut quick!  After that, it was a matter of a deep clean, and my writing room is ready for the summer. It’s been a week and no new visitors… yet. 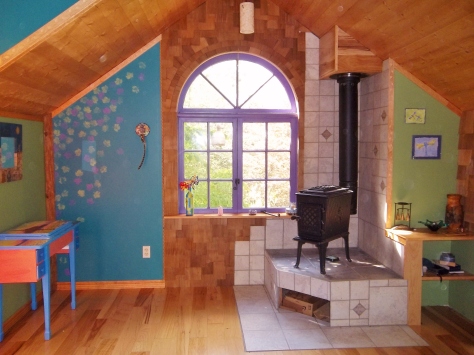 Bat Friendly Facts from the Oregon Dept. of Fish and Wildlife and me:

A  little creature that shares my world.

In most of my books, nature has a strong presence. It’s part of “write what you know,” and I often joke that I was raised by wolves. An exaggeration, but I was lucky enough to be brought up in the outdoors and feel quite comfortable in the woods.

Here’s a picture of my playpen, built by my dad out of sticks at the cabin overlooking Skylight Pond in Vermont.

When I was about 12 (and my brothers were 11 and 8), my parents used to drop us off on the Long Trail in the Green Mountains and pick us up three days later, fifteen miles down the path. We read maps, dealt with unexpected snow, built shelters, shooed porcupines from our food, and cut pine boughs for our beds.

1985 – On a month-long trek in Wyoming. I still have those clothes!

On other occasions, they’d leave us with the old canoe under a bridge (no life jackets back then) and pick us up miles downstream at the end of the weekend. It was a blast. It was normal. And somehow, we survived, even as our adventures increased in daring and duration as we aged.

Fast forward 25 years from those first independent forays into the wilderness: I married my husband, a man from Atlantic City, New Jersey. A city kid willing to brave country living for the sake of love. And, his encounters with wildlife make for endless comedy.

1 – Turtles. I’ve never seen a man run so fast as the first time he came across a big turtle on our hiking path. It was the size of a dinner plate. I pointed it out to him, mostly so he wouldn’t step on it. “Wow, look at that turtle.” He shrieked, hands flew up, and he ran down the trail in the opposite direction.

2 – Bugs. Tornado Boy was over last weekend, and he was expressing a lot of concern about spiders and bees. I called my daughter, “Are you and his dad teaching him to be afraid of bugs?” She denied any role in that behavior. Then I looked out the window and saw Grampy sprinting across the deck, swatting at an imaginary swarm of killer bees. “Never mind,” I told her.

3 – Snakes. We have lots and lots of little garter snakes around here. They’re about two feet long and not much thicker than a pencil (mostly). I try not to leave the doors of the house open because the hummingbirds fly in and can’t find their way out without help, which involves ladders. 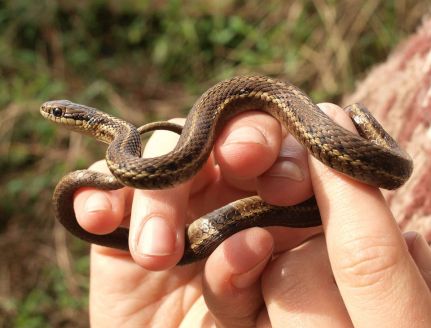 A tiny thing that eats slugs, worms and insects.

But yesterday, I was gardening and left the door open for about 15 minutes. My husband came tearing out of the house in a panic because two snakes decided to take up residence. I found the smallest one quickly as it slithered away from me. I picked it up and let it go in the bushes. The second one was hiding.

After a short hunt, I dragged it out from behind the furniture and held it for him to see from where he stood thirty feet away in the front yard in case he needed to run. I let it go and twenty minutes it was back trying to get in the house again. No luck, the door stays closed.

Other Oregon wildlife to be scared of if you’re from the city: Slugs, bats, coyotes, salamanders, and large frogs. But that’s another story.