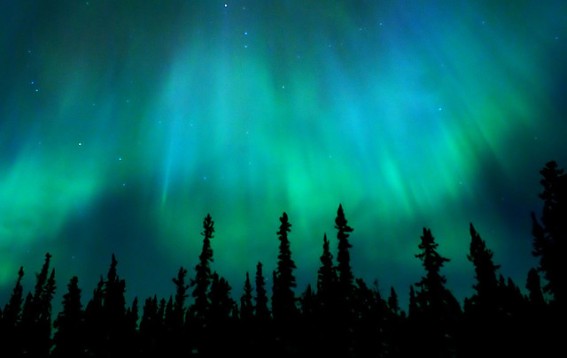 This is a 500-word stand-alone flash piece. I hope you enjoy.

I found the woman that Kester shot, stiff and snow-dusted beneath a fir. Other footprints head north, the white glaze of ice crunching as we track them in our heavy boots. This is my first hunt, my first war, old enough now to join the rebellion and execute my neighbors. Better than a bullet in the back, Kester says. You have to pick sides in these things.

“We’re stopping for the night.” Kester kicks the snow and points at the trees with his rifle. “You’re in charge of wood, Grayse. The rest of you set up camp.” I stare into the black forest beyond the body, my eyeballs stinging, toes gone numb hours ago. “Get going,” he barks at me. “I’m gods-damn freezing.”

My rifle abandoned, I trudge into the winter barrens beneath a star-spilled sky. The trees are giants wearing snow-draped robes, yet their crisp twigs and dead branches snap like small bones. I fill my arms, tramp back, and head out for more. Kester will nod when it’s enough, so there’s no point in asking.

Worried about losing my way, I follow the tracks while gathering my sticks, and the trek is easier where the snow’s crust was broken. Before I’ve hiked far, the trees thin and part, and at the forest’s edge, the night burns in a fire-show of light, rippling in hues of topaz and tourmaline.

Beneath the sky’s blazing ribbons, a village winks into existence, candles glowing in frosted windowpanes. I blink and rub my eyes with frozen fingers. Across the pale snow, I behold my countrymen staggering, stiffly, colder than death, lurching like disjointed corpses toward salvation. Their skeletal shadows stretch in the holy light back to me.

In a panic, I run toward the village. I don’t know why. Do I seek its snug hearths or the promise of golden windows beneath a child’s magical sky? Or do I flee my future? Am I a weapon of the soulless, a beast in a child’s skin, killing my victims in the cold? Before me, the hunted weep and fall as they flee. I grab a man who pleads on his knees and hoist him up. Arm in arm, we stumble through the deep snow before the calls of my pursuers.

The last to reach the village, the man staggers through an open door and turns, beckoning me inside. I want to join him in the warmth and light. Instead, I draw my knife and face the skylit snow and black rim of forest.

“What the hell, Grayse?” Kester demands as my unit tramps toward me across the barrens.

“I was…” Despairing, I glance back before attempting to explain the village, to defend my actions, but behind me, nothing more than the night’s aurora ripples over the snow. “I was…lost.”

Kester smacks me across the face. “Run off out here, you get lost forever.”