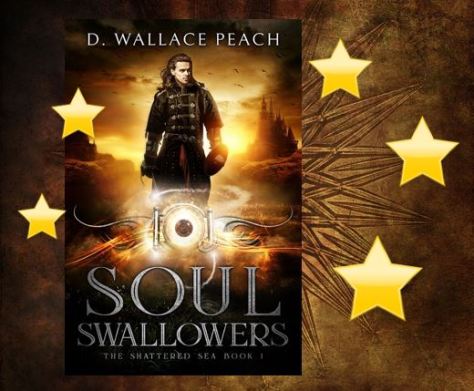 I’m on the mend after sleeping off a four-day fever. I apologize for neglecting everyone’s blogs and will start catching up today. I think the old bod was telling me that I’d spent too many days happy-dancing the release of Soul Swallowers.

For me, the first review always feels monumental, and it’s a thrill and relief when it validates the months of hard work. I’m delighted to share Soul Swallower’s first review, written by talented fantasy author Cathleen Townsend. (And I promise that I’m limiting my happy-dancing to my imagination.)

Have you heard? D. Wallace Peach has released a new fantasy series, and news like that is worth our attention.

In this book, Ms. Peach has taken a single world-building premise—that people can swallow other people’s souls after they die—and worked it into a fantastic, detailed secondary world. Here, the powerful squabble for ever more influence while the wretches and unlucky are sold into slavery. The main character, Raze, has turned his back on a life of wealth and privilege, and joins another man in building up a small farm, a freehold, assisted by former slaves who soon become an extended family.

But the Byzantine politics of Raze’s former circle soon entangle him again, and he’s forced to re-enter his old world to try to save the members of his new family…

(To read the last bit of the review, visit Cathleen’s blog, and while you’re there, you might check out her latest novella: The Golden Key)

Happy Reading whatever book you happen to be holding!