Another quick intermission in the muse posts.

I thought I’d share an idea for the holidays (which isn’t mine).

Missing Thanksgiving with kids and grandkids was a bummer, but the thought of missing Christmas is a heartbreaker. But who said we can’t simply postpone it?

For all those who are struggling with the decision about whether to get together with family and risk illness, or stay at home and pass the day twiddling your fingers in isolation, consider Christmas in July.

As the Grammy and instigator-in-chief in my family, I just set the date and booked a spot for a family gathering. In July.

We’re going to have a feast with turkey and cranberry sauce where we’ll pass around huge helpings of thankfulness. We’re going to string holiday lights around the fire pit and conduct a Secret Santa on the starlit deck. We might even decorate a tree in the forest!

Grampy and I will drop off presents this December, but the true gift of the holidays is time with our loved ones. It will happen. It will be special because we’ll all be in this together.

Stay safe and enjoy the holidays whenever you decide to celebrate them. ❤ 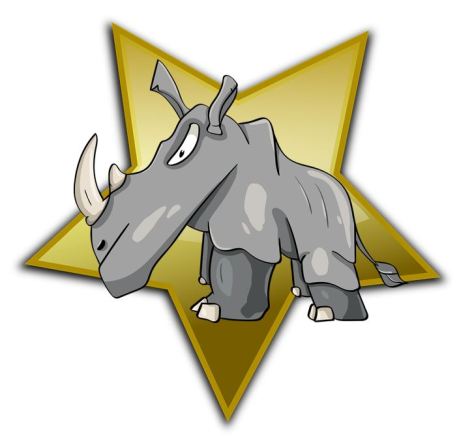 Back at the beginning of March, I kicked off a Mini-WriMo, which fondly become known as a Ninny Rhino. Everyone was invited to join in. We each were free to establish their own writing-related goals.

I had high hopes, but life got in the way. So after a week of not reaching my number, I lowered my goal by half. That’s how this works. Gentle goals and being kind to ourselves – a nudge to write without getting impaled.

If you responded to the slightest nudge, wrote one word more than you would have otherwise, organized your writing space, read an ignored article on marketing, sat for an extra hour of editing, etc., YOU WON the Ninny Rhino badge! (You’re free to download the above badge).

To celebrate, please share your accomplishment in the comments as well as a link to one of your favorite posts (any post and open to all writers and poets).  I encourage everyone who comments to visit a few other Ninny Rhino enthusiasts.

And if you want to do it again (or for the first time)… there’s always May. 🙂 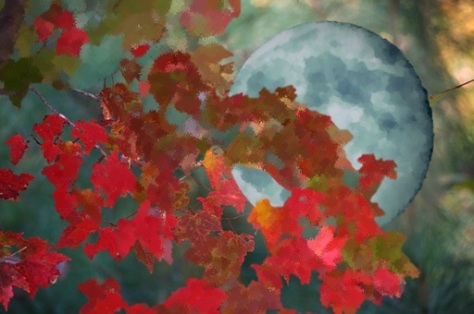 In my fantasy world, the Falling Moon welcomes a world of pattering rains and burnished leaves fluttering in brisk winds. The wilderness twirls and tumbles and the forest floor blazes in a coverlet of color. The land softens and patchworks of umber and gold quilt the hillsides. It’s a time of frosted breath and morning ice, of warm fires and falling light.

The Falling Moon shines over the world on October 16th

That night the travelers celebrated their safe arrival with the village. Lamb sizzled on spits over two cookfires in Phelan’s trampled gardens, and the women of Taran Leigh served the season’s last greens, seeded bread, and tart pies sweetened with clover honey. The men uncorked jugs of dark ale and passed them around the gathering, making for a jovial evening.

Taran Leigh’s cooper carted in a drum fashioned from an old cask and settled his bulk near the cookfire’s light. He thumped a rhythm as steady as a heartbeat as Torin brandished his wooden flute. The pair of them played a tune for the village, for the food and ale, for the fire’s embrace, for the freedom and Belonging spilling from the sky like starlight. Ceridwen sang, and the villagers joined in as if their songs too would break free of their bodies and soar. Conall hugged Treasa to his side and pointed up. Earlin raised her eyes to the night. The moon hovered, as round and shimmering and close to a golden coin as any of them would ever need.

The Constitution promises liberty to all within its reach, a liberty that includes certain specific rights that allow persons, within a lawful realm, to define and express their identity.

The centrality of marriage to the human condition makes it unsurprising that the institution has existed for millennia and across civilizations. Since the dawn of history, marriage has transformed strangers into relatives, binding families and societies together. The nature of marriage is that, through its enduring bond, two persons together can find other freedoms, such as expression, intimacy, and spirituality. This is true for all persons, whatever their sexual orientation.

As all parties agree, many same-sex couples provide loving and nurturing homes to their children, whether biological or adopted. And hundreds of thousands of children are presently being raised by such couples. This provides powerful confirmation that gays and lesbians can create loving, supportive families. Without the recognition, stability, and predictability marriage offers, their children suffer the stigma of knowing their families are somehow lesser. The marriage laws at issue here thus harm and humiliate the children of same-sex couples.

No union is more profound than marriage, for it embodies the highest ideals of love, fidelity, devotion, sacrifice, and family. In forming a marital union, two people become something greater than once they were. As some of the petitioners in these cases demonstrate, marriage embodies a love that may endure even past death.

It would misunderstand these men and women to say they disrespect the idea of marriage. Their plea is that they do respect it, respect it so deeply that they seek to find its fulfillment for themselves. Their hope is not to be condemned to live in loneliness, excluded from one of civilization’s oldest institutions. They ask for equal dignity in the eyes of the law.

Same-sex couples, too, may aspire to the transcendent purposes of marriage and seek fulfillment in its highest meaning. The Constitution grants them that right.