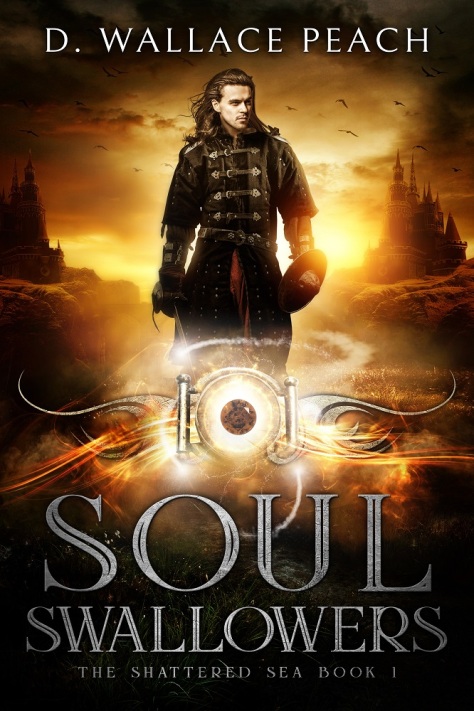 A crimson fire snapped in the hearth, the room overly warm, air thick despite a blustery rain tapping insistent fingers on the windowpanes. On the mantel, a stuffed falcon cast its glass eyes over the black ravenwood table, pewter plates and crystal goblets set for the arrival of dignitaries from Avanoe. Arrangements were in place, the terms agreed upon.Raze steeled his resolve, tension linked across his chest and shoulder blades like a skin of mail. His father, Lord Rydan Anvrell of Kestrel, loathed defiance, his mind shuttered to any attempt at reason, ears deaf to his own son.

“You will accept a betrothal to Nallea,” Lord Rydan commanded. “It is already decided, Raze. This is not a lad’s game.”

The insinuation that he acted the child fired Raze’s blood, and he chafed at the restraints placed upon his life. “She’s nine!”

“In six years, she will grow into a young woman old enough to wed. I will not argue this with you.”

“I don’t know her. I have no idea who she will be. And what of her choices? She isn’t old enough to understand what’s being asked of her!”

“That is of no consequence. You are my heir and will bear the title of Lord of Kestrel. With that, you inherit responsibilities, a future in the Vales. We are a conquered land. Do you believe our puny provinces will remain under independent rule? Do you think our rivals will dawdle contentedly within their walls?”

Raze curled his fingers, caging his temper. Debating an unknowable future only squandered his breath. His father paced, hands gripped behind his back, fury honing the sharp angles of his face and frosting his hazel eyes. Raze shared his straight brows, the lean sculpt of his bones, and hair the deep brown of polished wood, but little else. At sixteen years, he topped his father’s height, a result of his mother’s Ezarine ancestry. From her, he’d inherited the invaders’ milk-pale skin and curved amethyst eyes. He missed the comfort of her gentle interventions when facing his father’s ire.

“What about love?” he asked.

“Did you love my mother? Did she love you?” Barbs riddled the question, and he would use them to wrench out his father’s heart. “Was your marriage forced upon you against your will?”

The lord waved away his argument, though his face softened. “Nae, it was not.”

“Did you wed her for love?” Even if it made all the difference of snow on a summer’s day, Raze would compel an answer. His father would acknowledge the unfairness of his demand.

Rydan retreated to the window overlooking the rose garden, its glory withered, embrowned and brittle during winter’s bitter cold. The pruned shrubs dripped in the squalling rain, love’s blooms reduced to thorny canes with sharp tips. A corner of his father’s heart had remained faithful to his mother, tenderly caring for her roses, his affection for the delicate petals a stoic confession of love and longing.

Four years ago, she’d drowned in the Shattered Sea, and though they’d all, more or less, moved on with their lives, she’d carried a portion of their hearts with her when she died, and the wounds had yet to heal. Raze touched the pendant resting on his chest, the soulstone empty and patient for his death. His mother’s soul tumbled somewhere at the bottom of the sea, and at times like these, he wished his father had recovered it and swallowed her essence. Perhaps they wouldn’t feel so at odds.

“Ai, we wed for love. There is your answer.” Rydan pivoted from the garden, the muscles in his jaw tight. “But those days lie in the past. The Tegir Empire is in its infancy and consumed by political realignment. They disregard us, Raze. We enter times of critical choosing, moments of vulnerability that require vigilance. Our lives are not solely our own, son; they ripple over porous borders into the lives of others. You will submit to this path and honor your obligations.”

Rydan stared at him. If he searched for a crack in Raze’s conviction, he wouldn’t find one. “Destiny seldom hands you exactly what you desire and rarely in the form you long for. You must embrace the art of compromise.”

Raze met his father’s eyes. “And if I refuse?”

“You will deeply regret your decision.”

“Then I must endure that regret, my lord Father, for I am already wed.”