Only four this month! I’ve been slacking.

Actually, I’ve been super busy preparing for my launch and then dropping into bed at night, too tired to read.

This month, my offering of  4 and 5 star reviews includes fantasy, sci-fi, and a children’s book that my 7-year-old grandson reviewed. I hope you enjoy the browse.

I really, really enjoyed this book. The story starts with a “boys will be boys” rape of a very drunk teenager at a party. The main character, Ben, doesn’t participate, but he also doesn’t take strong action. This story is about his loss of innocence as he grapples with his guilt and the disheartening cultural biases, including within his own family, that force the victim into silence and give the perpetrators a break.

The story, the attitudes, and the choices of all the characters felt authentic to me. I related deeply to Ben as his rosy, privileged world dimmed, and he was forced to grow up and consider his values and actions, to decide what kind of person he wanted to be. Though his situation was unique, the loss of innocence and the rite of passage into adulthood felt universal. He’s a great character that I liked a lot.

There is a paranormal thread to the story that complements the main one. I wasn’t sure the paranormal aspects were necessary, but they didn’t detract, and I appreciated Ben’s relationship with the young woman Puppy and how healing and defining that was for him. All of the characters were beautifully written. The pace is perfect, and the story moves along without a hitch. The ending felt important. Highly recommended. 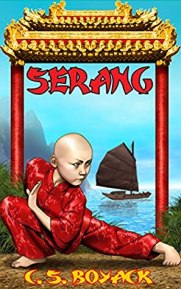 This is my first read from Boyack that wasn’t a madcap paranormal adventure, and I enjoyed the seriousness of this story. It’s described as an origin story about Serang who has a role in the Lanternfish books (which I haven’t read yet). I think that description is exactly right.

The story begins when Serang is 6 years old and progresses through her teens. As a child, she’s abandoned at a temple by her mother. The monastery becomes her home, its residents her family, until the Emperor has the monks killed. On the run, Serang finds a new master who continues her training as the two of them travel across the harsh land.

The characters are wonderfully 3-dimensional, and I enjoyed the way their relationship developed. The worldbuilding is exquisite. After I finished reading, I learned that the tale is a fantasy, and I laughed because I had assumed that the setting was a real place.

The plot consists of the journey as well as Serang’s training and mastery. As an origin story there’s no giant climatic conclusion, but there is a satisfying ending to the intriguing tale. The pace is steady overall with moments of exciting action. I recommend this book as a companion read/prequel to the Lanternfish books, which I’ll be reading soon.

Aftermath (Book 2 of the Shard Chronicles) by Ono Northey

Aftermath is the second book in the Shard Chronicles series. Any book that’s over 600 pages makes me a little squirrelly, but I enjoyed the first book in the series and dove in.

The main strength of both books is the wonderful characterization. Steve is an awesome protagonist and tough as nails. In this book, we get to know the bad guys who were rather nebulous in the first installment. These mages are so powerful that they almost don’t know how to function in the real world and the situations can get funny as well as outrageously weird. They also kill and destroy indiscriminately without the slighted idea that this might be wrong.

The writing is exceptional. Northey has a wonderful grasp of language, description, action, and dialog. It’s hard not to be impressed. The world-building is also outstanding. It’s broad and deep, and comes off as real science and psychology… and after reading, I almost believe that magic exists. Overall, I enjoy the long discussions of the power of perception and mind over matter, though some readers may find this too labored.

And that gets me to the challenge with this book. I think it suffers from a second book slump. As wonderfully as its written, there’s a long long stretch (about half of the book) where the plot stalls. Several characters from book 1 disappear while Steve trains his mind and the mages prepare for conflict within their ranks. The action is great when it happens, but much of this book seems like preparation for the third book. That’s a lot of preparation.

This is a hard book to rate. I love the writing and characters and didn’t skim any of the 600+ pages. But the lack of movement in the plot and long delivery were a disappointment. I’m going in the middle with four stars and a warning to readers that the “action” in this book is conceptual more than physical.

Brody Cody and the Stepmother from Outer Space by Toni Pike

I purchased this book for my grandson, and this is what he said about it:

I liked this book. It’s about this boy, Brody Cody, whose mom died. He and his dad live together and Brody doesn’t have very many rules. Then his dad goes away and comes back with a new mom. Brody doesn’t like her because she has rules, like eat vegetables and do chores. He thinks she’s an alien. The best part is when he thinks he sees the spaceship. I liked Brody, and he found out having a mom was pretty good. I read the whole book. There aren’t pictures, but it was good.