My smarty-pants muse was right… again. I needed to write and pelted out 62,000+ words and a sketchy rough draft of the first book in a new series.

To celebrate, I thought I’d share the opening scene. It’s unfinished and undoubtedly will change as the story unfolds (bobs eyebrows mysteriously). I hope you enjoy it. 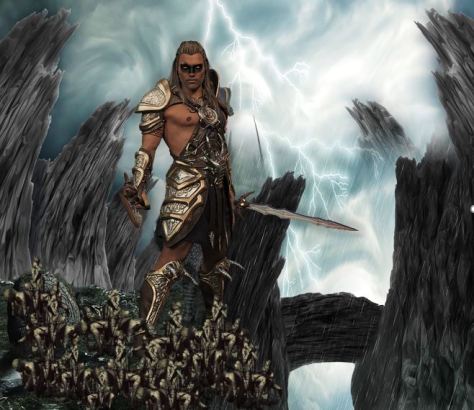 Kalann il Draak, the First of Chaos, aimed his cannons at the Veil. From the eastern sun to the western moon, the curtain of light spanned the mountains, banishing him to the forsaken waste that stretched north beyond the known lands. The silver wall shimmered, undulated with elemental power, the essence of matter. Its energetic core bound the illusory world together with the strength of goblin steel.

He would destroy the rippling wall that divided him from his kingdom, shatter the balance of creation, and wreck chaos on the myriad patterns of the world. The First, the sacred gods worshiped by of the mortal races, would vanish from the land.

His sword crackled, spat veins of lightning that illuminated the roiling clouds and fractured the rock beneath his army’s heels. The tortured earth swallowed slaves and soldiers alike, their screams lost to the grinding rock and the wind’s keening howl.

“I will destroy you!” he roared up the barren slopes.

The First, his brethren, stood sentinel along the ridges, hands raised in silent defense, feeding the Veil’s mass with heat harvested from the mountains’ core, light stolen from the dawn. A blizzard of snow swept into the air, blew sideways in the skirling winds, blotting out the sky.

Draak’s sword swept down, sliced a rift into the Veil that the First snapped shut with a thunderous clap. The mage laughed at the feint as cannons strung along the foothills belched pulses of disruptive power, stripping matter of its binding force. The white-hot blasts generated surges. Waves bulged along the Veil’s magnetic lines like sound along an instrument’s string. Veins of power tore and reconnected, releasing eruptions of unbound light.

The Veil fractured. Seams burst open where the energy splintered. Like a stone through a mirror, shards of light flung outward, and Draak ordered his army through, secreted in the shattered wedges that pierced his enemy’s land. Another volley of fire penetrated the weakened wall. The bulk of his vast horde stormed up the slope, eager for the final rupture.

But the power of the cannon proved unstable, uncontainable, carried along the frayed curtain by sheer winds. His foes threw up shields like patches on torn cloth, stitching up the gaps with new manipulations of heat and light. The Veil began to cool. Snow transformed into steam as the mountains burned and the elements bound into new matter, altering the foundations of the world.

The First, guardians of the wall of light and the civilization within, gloried in their victory. Below them, trapped in the barren desolation of the north, Draak shook a curled fist at his brethren. But hubris was their flaw and his fury a ruse. The cannon had briefly unraveled the fabric of matter, not enough for an entire army to slip through, but sufficient for chaos to hook its curved claw. The mortals would see to the rest.