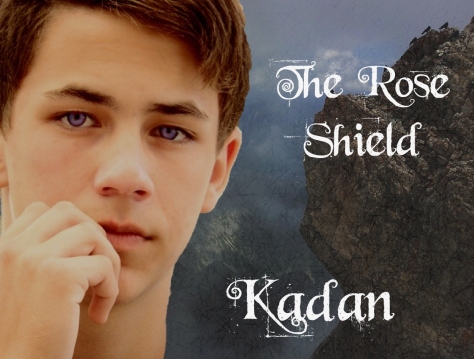 The Rose Shield is my 4-book fantasy series planned for March-ish, um, maybe April. Book One actually has a name now: Catling’s Bane.

I’ve been introducing characters for the past few months. You’ve met:

Raker, the man who hears voices in the fog
Catling, a six-year-old with a rose birthmark around her eye
Whitt, the boy battling crajeks in the swamp
Gannon, captive in the belly of the Wandering Swan
Vianne, an influencer who tortures poor Gannon

Excerpt from  Catling’s Bane, The Rose Shield: Book One

An influencer. The prospect of mastering the skills of manipulation tangled Kadan’s stomach into a hard knot. What would his uncle require of him? To ease unsavory negotiations, to inflict torture, to smooth over the murder of children, to halt the beating of an innocent heart?

He walked to the tier’s edge and gazed over the ever-widening layers that petaled outward into shadowy markets hundreds of feet below. The moons cast an eerie light on the evergreen forests and fields stained with freshly fallen snow. The Blackwater coursed through it all, an icy serpent winding to the distant sea.

By inches, he shuffled closer to the rim. His toes extended into the air, and he closed his eyes. For an endless moment, he teetered on the rim of a choice wholly his own. His actions were harmless, weren’t they? Or had he grown cruel, learned the high ward’s lessons of power? He couldn’t abide his life, couldn’t bear the commitment his uncle required. A raw breeze ruffled his hair, and he suddenly couldn’t wait to fall.

A hand grabbed his jacket’s collar. He gasped and his eyes flew open. Fighting for balance, he reeled backward onto the tier. His heart hammered in his ears as he spun and ripped loose of the grasp.

The influencer stepped back and offered a modest bow. “My apologies, I didn’t wish you to fall.”

“I was… thinking.” Kadan straightened his jacket.

“This province isn’t without its beauty,” the influencer said, stepping to the edge. Kadan didn’t move, the young man unfamiliar to him. He wore the blue jacket of an emotive, shaved head patterned with swirling woads.

The man smiled. “I’m Qeyon, from Ava-Grea. I don’t believe I am here for you, Kadan.”

In truth, Kadan wasn’t surprised that the man knew his name. “My uncle is sending me to Ava-Grea for training. He wants my oath. He wishes to make use of me.”

Qeyon paused to gaze over the high ward’s tier. “Your uncle is a powerful man, and I imagine he is seldom crossed. Wait until you experience Ava-Grea, Kadan, before you decide to leap.”

Note: Many thanks to everyone who offered to beta read and to all those who considered it, but just didn’t have the time. This blogging community is immensely generous and supportive. I was successful in finding some willing souls. Stay tuned! ❤

97 thoughts on “The Rose Shield – Kadan”