Once again, while I’m away, I’m catching up on posting the book reviews that I completed over the past few months. This is Part Two. Comments are open, but since I’m still off the internet grid, it will be a bit longer before I can reply. Please click through and check out a wonderful blogger’s site. Or, better yet, try out a book! Enjoy! 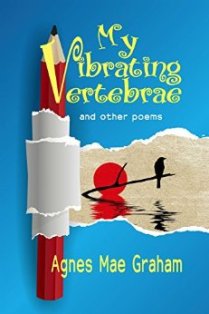 My Vibrating Vertebrae: and other poems by Agnes Mae Graham

A wonderful collection of poems by Agnes Mae Graham, saved and published by her children C. Graham and L. J. Baker as a tribute to her mother. I read this book over a weekend. Many of the poems are playfully clever, a clear sign of Ms. Graham’s robust sense of humor. She even titled one “Nonsense Rhyme.” Yet she also writes poignantly about her love of home and family, and the trials of life including a beautiful piece about the war “The Terror and The Tears.” The poems stand on their own, but they also provide a sweet glimpse of the poet and her life. A great read. 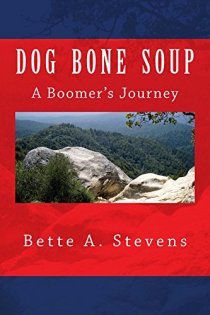 Dog Bone Soup is an engaging tale set in the 1950’s and 1960’s and though Stevens indicates that the book will speak to boomers, in particular, the family drama and the emotional world of the characters are timeless and relatable. The story follows the oldest brother in the family, Shawn Daniels, a boy whose young life is burdened by dire poverty and an abusive, alcoholic father. His proud mother does the best she can for her children, and Shawn becomes a man before his time, helping to support the family.

Though the story deals with a struggling child in a tough situation, the book has many moments of childhood humor and delight, especially between the brothers. Shawn not only survives his rough start but comes through as a strong individual with solid values and high personal integrity.

Stevens writing is captivating, raw and sweet, with well-drawn characters. I read the prequel “White Trash” prior to this book, however, I feel that Dog Bone Soup easily stands on its own. A compelling read about childhood resilience and growth into manhood.

D. G. Kaye writes a compelling narrative about her narcissistic mother who whirled through Kaye’s childhood life like a tornado, prone to rages, self-absorbed, and unreliable as a parent. Her father was in and out of the household, his relationship with his wife volatile, and Kaye remembers dreading his next departure and worrying that he might not return at the end of each day.

It wasn’t until she turned 18 and left home that she was able to begin looking back at her life, evaluating the dynamics of her relationship with her mother, and making choices for her own well-being.

Conflicted Hearts doesn’t read as a story as much as it does a reflection on Kaye’s life and emotional growth. For those who grew up in emotionally chaotic households, the dynamics of blame and guilt will sound familiar. The constant worry, the burden of responsibility for siblings, and the desperate need to keep the peace will ring bells.

Kaye’s writing is candid with bits of humor and some light moments of joy in her journey of growth. The message of the book speaks to the strength of a positive attitude and outlook, and the role of forgiveness in moving forward. If you love memoirs and reflections on personal growth, this book will hit the mark.

Twin Desires accomplished it’s twin goals with plenty of romance and a thrilling plot. Sandra Eastman is making a comfortable life for herself when corporate CEO Blake Sinclair takes an interest. Unfortunately, his attentions coincide with the escape from prison of Blake’s psychotic twin brother. Alex has one goal – to murder his brother and flee with his fortune. Sandra is a pawn in a deadly plot between a brother who loves her and his twin who wants to kill her. Wright has developed distinctive characters with a lot of personality and fun dialog. Frequent point of view shifts took some getting used to, but otherwise, Wright’s writing is on the mark. A fast-paced and suspenseful read. Lovers of romantic thrillers will have a great time with this one.

Bhathal’s Poetic Rituals is a collection of poems that explores life’s rituals, those of a mother, wife, lover, and teacher. There are real gems in here with lovely imagery, humor, passion, and ambivalence. My favorite poems were the lighthearted rhymes about being a mother of young children. A great read to visit and browse throughout the day.