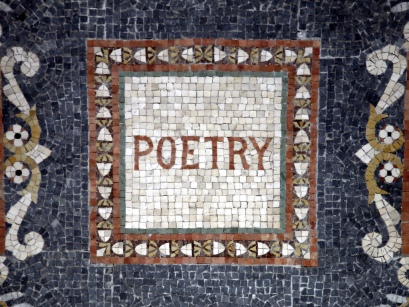 On rare occasions, poetry pops into my dreamscape complete, every word in place and patient for ink. Well, last night that did NOT happen. Instead, what popped into my head was a poem I wrote when I was 8, followed by another I wrote at 20, and one beyond that.

What popped into my head was an idea for a post!
A good thing, since I was coming up with squat.

Below are those poems:

If all the world were patterns
Ill tell you what there woud be
A dot woud be a flower
A line woud be a tree.

Age 20 – after staying up all night trying to write a poem for class, I gave up and wrote this

Two ravens sat one sunny day
Upon a scarecrow stuffed with hay.
They perched on his arm and pecked at his head
Just to see whether the bastard was dead.

Although not quite certain the poor soul was dead
They looked at each other and one raven said,
“He must be real stupid with a head full of weeds.”
“Pretty damn ugly,” the other agreed.

Up and down its arm they paced.
They looked in its eyes and said to its face,
“Not very kind of your family or friends
To leave you out here in the rain and the wind.”

The ravens they strutted in deep contemplation
Worried to death by the sad situation.
They sought for an answer to bring him relief
But the scarecrow’s position was far past belief.

When on came the evening the facts they did face
That the scarecrow was really a poor hopeless case.
They filled up their beaks with plenty of corn
And headed due west over cornfields toward home.

Age 50 – written for The Melding of Aeris

She is the verdant field, the quaking leaves
Arching branches heavy with summer sweet
He finds her entangled in creeping vines
Wending the pathways to his heart

She colors the lover’s ardent cheek
Burns in the flames’ crimson belly
Her fingers pry open the secret worlds of night
To find him, buried in a gemmed mine
Yet undiscovered
Longing

And when the petals fall
Carried by winter’s white wind
Love will bear Beauty beyond the veil of death
Into eternal spring.

98 thoughts on “Poetry through the ages…of me.”