On occasion, authors may choose to write animals into their stories. Animals can be valuable additions if done well. They can also detract from a story if an author isn’t careful.

I’m not talking about anthropomorphism in this post – the attribution of human characteristics to animals. Animals that bake cakes, sing show tunes, communicate by telepathy, shapeshift, form armies and conquer cities are more open to an author’s creative interpretation, and often human authenticity matters more than the animal traits.

I’m talking about your everyday animals (including imaginary creatures) that our characters share the world with and encounter in their daily lives and adventures.

There are times when writing animals into our stories isn’t an option. For example, many of my fantasy characters ride horses. Knowing something about horses – their abilities, needs, and personality quirks – is a requirement in order to bring a sense of reality to my books.

There are also times when we add animals for what they contribute to a story. I enjoy writing tales with animals and most of my books have at least one that plays a role larger than mere scenic backdrop. The larger the role the animal plays, the more the writer needs to attend to its needs, presence, and activities.

We might choose to add animals for a number of reasons:

In the Dragon Soul series, one of my favorite characters is Arful, a black mutt. Arful certainly adds comic relief, as well as moments of tenderness in a callous world.

For a time, Morgen watched the woman and her children, accepted into the familial circle in the sandy lane, invited in by Arful, the dog that ignored all social respectability and did away with any form of restraint.

Aedan ran in circles, chasing or chased by the dog, somewhat difficult to distinguish between the two.

The Seabourne’s cantankerous first mate shows his “softer” side.

Tending the captain’s pet now, was all Treasach could think. What could possibly be next?

The dog ran up and down the deck, barking inanely at the men in the rigging as if they were crows nesting on the yards. It pushed its head between Treasach’s knees, nearly knocking him off his feet. If it hadn’t been so comical, and if he hadn’t some fondness for dogs, he would have tossed the beast overboard.

And most importantly, Arful contributes to the arc of the main character, Morgen, a sea captain who avoids responsibility and finds himself saddled with a dog. Responsibility for Arful leads to responsibility for a family, a people, and ultimately to a decision to risk his life for the archipelago in which he lives.

With a frown, he threw a stick for Arful who bounded after it, overshot it, and got his legs tangled in a flailing turn. Morgen had never encountered a more uncoordinated dog. The thought that he collected misfits and lost souls rankled him, and he walked behind the house to sit on the seawall and stew.

Writing animals into a story comes with challenges that a writer has to keep an eye on. A few tips:

1. Know or learn the natural behavior of the animal. Most of us have experience with dogs, but we may have to do some research on wolves, elephants, or goats. You can’t beat hands-on experience.

2. Remember that domesticated animals need to be cared for. Your character can’t just leave without making arrangements. If your characters go on an adventure with an animal, consider how the animal is provided for and how it manages the obstacles along the way. Writing the details isn’t necessary, but knowing them is.

3. Be careful not to let the animal become a distraction that slows down your story. Weigh the benefits against the “intermissions” in your pacing.

4. Remember that the animal, like any secondary character, has to have reasons to be in the story. The more reasons, the better.

5. Avoid stereotypes and cliches – give your important animals authentic personalities and quirks.

Animals in stories can be wonderful additions. When well integrated, they can be amusing, reveal the character of your protagonist or villain, and augment the themes of your story and advance the plot.

Do you write animals into your stories? Have you had to research animal traits and care?

Did you see it?

The spelling mitsake in the tilte of this post?

I live in a small town, always have.

Not that cities don’t have their allure, they just aren’t for me. I require a tour guide and someone to drive me through all the crazy traffic. My daughter became a city girl after 4 years at Boston University. The idea of living in the mountains makes her eyes roll back in her head. 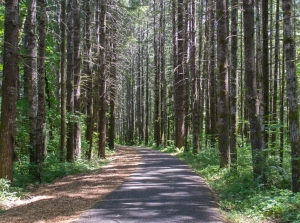 I moved to the Coastal Range of Oregon about 4 years ago, following the dream of grannyhood that’s since come to fruition. We live up winding roads amidst giant trees and autumn fog. The owls and coyotes sing for our nighttime pleasure. We heat with wood and I attempt to grow vegetables. Thank goodness for satellite despite its painful slowness.

Our community is cohesive despite our many differences. We know each other by sight, if not by name. I’ll get there as the years ramble by; I’m an introvert but rarely shy.

I like the history of the place I live – the pioneers and booming logging days. I love the stories, poetry, and songs that arose from the wilderness and a community close to the land. Many of the people in those stories and songs are still here. At the very least, they’re remembered. We have our local legends; we run into them at the hardware store or post office.

Me and my helpers at the Saturday Market. I borrowed them from the neighboring tent and compensated them with homemade cookies.

Small towns are great places to be a writer. My books are popular at the library as my neighbors explore what the local author is dishing out. Our librarian called me about hosting an event and will stay open after hours for my November signing. I find space in the local newspaper and on the shelves of shops that don’t even sell books. I did a signing at the Saturday Farmer’s Market and had my best day of sales as the community stopped by with their enthusiasm and friendly support.

I may have to drive 40 minutes to the pharmacy or to purchase paper for my printer. The movie theater is an hour’s trip, the same haul for a host of other conveniences. But I love my small town. It’s a great place to write.

My husband and I watch a lot of action and superhero movies. Did I mention that he’s 10? A suggestion that we watch something with an actual plot earns the “Really? Do I have to?” face.

Well, I’m a good sport, so last night we watched the latest Mad Max Fury Something or Another. I shouldn’t say it doesn’t have a plot, because of course it does (spoiler alert):

I know, you’re shocked! Who would have thought?

In the early 19th century, Georges Polti compiled a list of 36 dramatic situations after studying Greek and French literature. Shorter lists also exist, but Polti’s outline has endured to this day. I have difficulty thinking of a story that isn’t a spin on one of his basic formulas.

The idea for this post rose from my “comment chat” with Carrie from The Write Transition on one of my posts Gardeners and Architects. She astutely noted that one key to breaking free of formula-writing is great characters. And she’s right – compelling characters can save a been-there-done-that plot.

I added unique setting as another factor (I’m a fantasy writer after all), but ANY opportunity to diverge from our readers’ expectations is worth serious consideration. Otherwise, were just churning out The Same Old Stories, right? Think of Pocahontas and Avatar…same plot, fresh take!

As I typed out the list below, I reminisced about the books I’ve loved. Each one contains an overarching plot complemented by a combination of subplots that wove a more complex tapestry for the reader. To think that millions of unique stories originated from such a small collections of human scenarios is pretty mind-boggling.

Here are those 36 dramatic situations compliments of Wikipedia with my simple examples:

What do you think? Can you think of a story that doesn’t fit the mold?

On rare occasions, poetry pops into my dreamscape complete, every word in place and patient for ink. Well, last night that did NOT happen. Instead, what popped into my head was a poem I wrote when I was 8, followed by another I wrote at 20, and one beyond that.

What popped into my head was an idea for a post!
A good thing, since I was coming up with squat.

Below are those poems:

If all the world were patterns
Ill tell you what there woud be
A dot woud be a flower
A line woud be a tree.

Age 20 – after staying up all night trying to write a poem for class, I gave up and wrote this

Two ravens sat one sunny day
Upon a scarecrow stuffed with hay.
They perched on his arm and pecked at his head
Just to see whether the bastard was dead.

Although not quite certain the poor soul was dead
They looked at each other and one raven said,
“He must be real stupid with a head full of weeds.”
“Pretty damn ugly,” the other agreed.

Up and down its arm they paced.
They looked in its eyes and said to its face,
“Not very kind of your family or friends
To leave you out here in the rain and the wind.”

The ravens they strutted in deep contemplation
Worried to death by the sad situation.
They sought for an answer to bring him relief
But the scarecrow’s position was far past belief.

When on came the evening the facts they did face
That the scarecrow was really a poor hopeless case.
They filled up their beaks with plenty of corn
And headed due west over cornfields toward home.

Age 50 – written for The Melding of Aeris

She is the verdant field, the quaking leaves
Arching branches heavy with summer sweet
He finds her entangled in creeping vines
Wending the pathways to his heart

She colors the lover’s ardent cheek
Burns in the flames’ crimson belly
Her fingers pry open the secret worlds of night
To find him, buried in a gemmed mine
Yet undiscovered
Longing

And when the petals fall
Carried by winter’s white wind
Love will bear Beauty beyond the veil of death
Into eternal spring.